The FBSD issues Groundwater Credits that can be used when groundwater demand exceeds the applicable groundwater reduction requirements without becoming subject to payment of a disincentive fee. 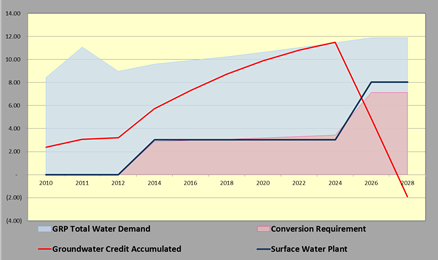 Regulated entities who exceed the FBSD's groundwater reduction requirements may request over-conversion credits for the amount of alternative water supply that they utilize over and above the amount of reduction required in the FBSD Regulatory Plan. For metered alternative water supply other than treated effluent, over-conversion credits are issued on a gallon for gallon basis.

For every student sponsored in the district’s “Learning to be WaterWise” water conservation program, the city receives a water conservation credit of 84,000 gallons. The 84,000 gallon credit is based on a study conducted with the cooperation of the Texas Water Development Board which concluded that the potential savings of the program was 1,400 gallons per household per month.