The cemetery contains the remains of prisoners and guards who died from 1912-1942 at the Texas Department of Corrections’ Central Prison Unit. Originally located outside of Sugar Land’s corporate limits, the prison cemetery and surrounding property was dedicated to the City in 2006.  The cemetery is part of 65 acres of undeveloped property. The annexation of the property and subsequent designation as parkland ensures the preservation and maintenance of the cemetery.

The city of Sugar Land and the Fort Bend County Historical Commission unveiled a Texas historical marker at the site of the prison cemetery. The marker chronicles the history of the region including the often oppressive, brutal conditions found during the 19th and early 20th Centuries when prisoners labored under the state convict lease program, a system that ended shortly after Sugar Land’s company town was established in 1908. Convict leasing was a state institution and practiced throughout the southern United States.

The City worked closely with the Fort Bend County Historical Commission and Texas Historical Commission to designate the property as an historic site and ensure necessary archaeological surveys. Additional surveys will be conducted prior to the development of future parkland -- plans include cemetery enhancements.

The City is also working closely with the Sugar Land Heritage Foundation to further develop a museum opened in 2018 that tells the history of Sugar Land starting with its creation as a company town.  The museum will also document the surrounding area’s early history including the Karankawa Indians, the area’s earliest known inhabitants; the first settlers in the 1800s; the prison farming and convict lease program; and more. 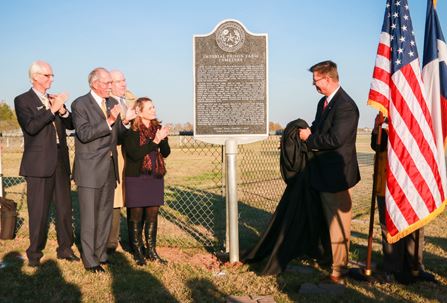 Penology for Profit
An in-depth, comprehensive, scholarly examination of Texas' convict leasing program (1867-1912). Before the discovery of oil and the advent of Progressivism to Texas, the state dealt with prison overcrowding by leasing convicts and their labor to private industry and funneling the profits into the state's coffers.

Exhibit on the State of Texas Convict Leasing