What are Wayside Horns? 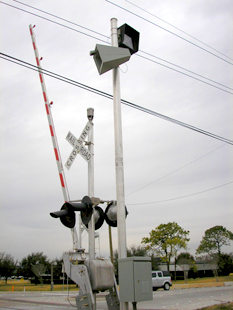 One of Sugar Land’s wayside horns. The horn is aimed toward the approaching motorist. The installation includes a flashing light in the shape of an “X” that is visible from along the railroad tracks. The flashing light signals to the train engineer that the wayside horn system is functioning normally and confirms to the train engineer not to blow the train-mounted horn.
Wayside horns are stationary horns installed at railroad crossings that warn motorists of oncoming trains. Wayside horns improve quality of life by substantially reducing the sounding of traditional train-mounted horns. Wayside horns blow a focused sound pattern aimed towards the direction of oncoming vehicular traffic.

Wayside horns reduce train horn noise in several ways:
The installation of wayside horns is evidence of the city’s commitment to improving quality of life. The city’s initial capital cost for the wayside horns at all 10 crossings was approximately $800,000. The 10 crossings now with wayside horns are every crossing between Dairy Ashford and the Nalco driveway entrance, inclusive.

While the city’s train noise reduction measures greatly reduce train horn noise, these measures do not fully eliminate the potential for railroads to blow the train-mounted horns. A train engineer may continue to blow the train-mounted horn if the engineer detects a hazard at the crossing. A crossing hazard could include a car stopped on the tracks or the presence of nearby mowing or maintenance crews.

As of 2012, the city has one remaining crossing targeted for noise-reduction measures. This crossing is Circle One Drive, also known as Ellis Road, which is the entrance to the former prison property west of State Highway 6. In 2011, the city allocated funding and developed a capital improvement project for the installation of a wayside horn system at this crossing. The city is negotiating modifications to the city’s existing wayside horn agreement with Union Pacific Railroad to allow for this installation. Union Pacific Railroad has requested modifications to indemnity and insurance provisions of the agreement which have delayed the finalizing of the agreement.