If not for the heroic efforts of two police officers, the Sugar Land Police Department would be facing a nightmare – the second line of duty death in the history of the city.

It’s often said that seconds make the difference between life and death. Officers Daniel Barbarick and Demarcus Mitchell proved the reality of that statement on March 20 when one of their own was struck by a drunk driver. Officer Ruben Munoz was left trapped inside a patrol vehicle, unconscious and clinging to life.

“This is a call we hope we never get,” said Police Chief Eric Robins, who rushed to the scene after receiving the tragic news. “We’re lucky and thankful that Daniel and Demarcus raced to his aid and utilized their training to save Officer Munoz.”

“They never flinched. After witnessing the tragic events that had unfolded on the freeway, they never gave a second thought about their personal safety. They placed themselves in harm’s way and did their jobs. There’s no doubt in my mind that Officer Munoz is alive today because of their actions. They’ve made us all incredibly proud and are examples of the outstanding work the officers of our department provide every single day.”

It was just after 2 a.m. when a call dropped for a single-vehicle accident. The events that unfolded were as bad as it gets. Officers located a vehicle that had struck the center wall of U.S. Highway 59. The driver admitted to drinking and was taken to a nearby location for sobriety testing. Officer Munoz remained at the accident and positioned his vehicle with emergency lights flashing to protect those at the scene. While a wrecker was hooking up the vehicle, a pickup truck slammed into Munoz’s Tahoe. A fourth vehicle hit the pickup truck.

Those who made the scene all repeated the same words, “It’s bad …” And they were right. Many didn’t think Munoz would make it.  A pickup truck smashed into the back of his Tahoe at a high rate of speed. The damage to his police SUV looked un-survivable. 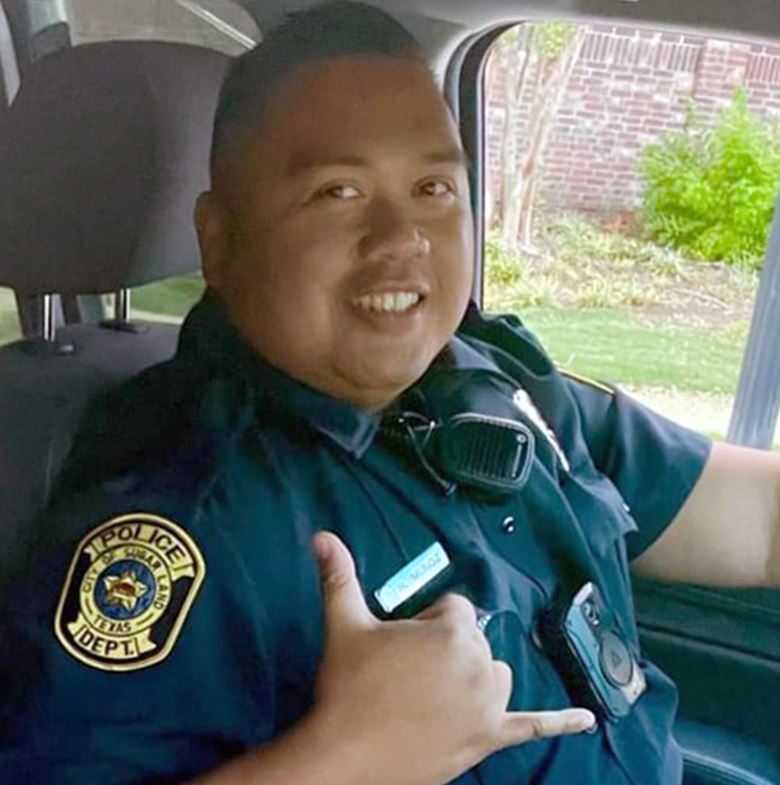 Barbarick pried back the door to the Tahoe and moved Munoz to the HOV lane with the help of two good Samaritans. While they were assessing his condition, a Jeep slammed into the pickup truck at a high rate of speed and caused the truck to strike the police SUV, nearly striking the three people attending to Munoz. After carrying Munoz to a safer location, Barbarick was joined by Mitchell. They quickly assessed the condition of Munoz and determined he was not breathing, so they began emergency medical care, including CPR. They literally restarted his heart and remained by his side after paramedics arrived to provide advanced medical care – consistently encouraging Munoz to “stay with us!”

The major accident closed the freeway for more than six hours. The only involved driver who wasn’t drinking was Sugar Land’s police officer, and he came close to paying the ultimate price. None of what happened was necessary, but that’s the dangers of a police officer’s life. Munoz and his young wife have two small children. Law enforcement families kiss their loved ones goodbye everyday knowing there’s a chance they may not return home. Barbarick and Mitchell made sure Munoz will go home, though it will be a while.

Munoz remains in the hospital and has undergone numerous surgeries; however, he is alert, conscious and has expressed gratitude for the tremendous outpouring of support from his fellow officers and the Sugar Land community. His family is hopeful he’ll soon start the long road of physical therapy and eventually rejoin fellow officers at SLPD and continue his passion for serving others.

“We will be recognizing the heroic work of our officers,” said Robins. “They represent the best of us and what makes the men and woman of SLPD very special. Their commitment to serving others in the most dangerous situations and their ability to act decisively under the most stressful environments is rare. We should all be very proud of each and every one of them. I know I am.”

A focus on hiring quality officers with a passion for service, ongoing training, professional development and leadership opportunities was evident from the quick, decisive actions of the heroes who saved the life of one of Sugar Land’s finest. It takes a rare breed to run toward danger when others are running away, and there’s no shortage in Sugar Land. This commitment to serve has contributed to the unprecedented community support Sugar Land has always shown for its police department. Even while other communities throughout the nation have been increasingly critical of law enforcement during the last two years, community support in Sugar Land has continued to increase for its law enforcement heroes. It’s a testament to officers like Barbarick and Mitchell who continue to shine during the worst of times.

Sugar Land continues to remain among the nation’s safest cities because of the brave men and women who face danger every day to keep the community safe.

“I think sometimes we just take for granted the tremendous sacrifices they make for all of us,” said Robins. “For us, it’s just the job we do. But I think we should all find ways to recognize their contributions more often – myself included. The men and women of SLPD are the best in the business.” 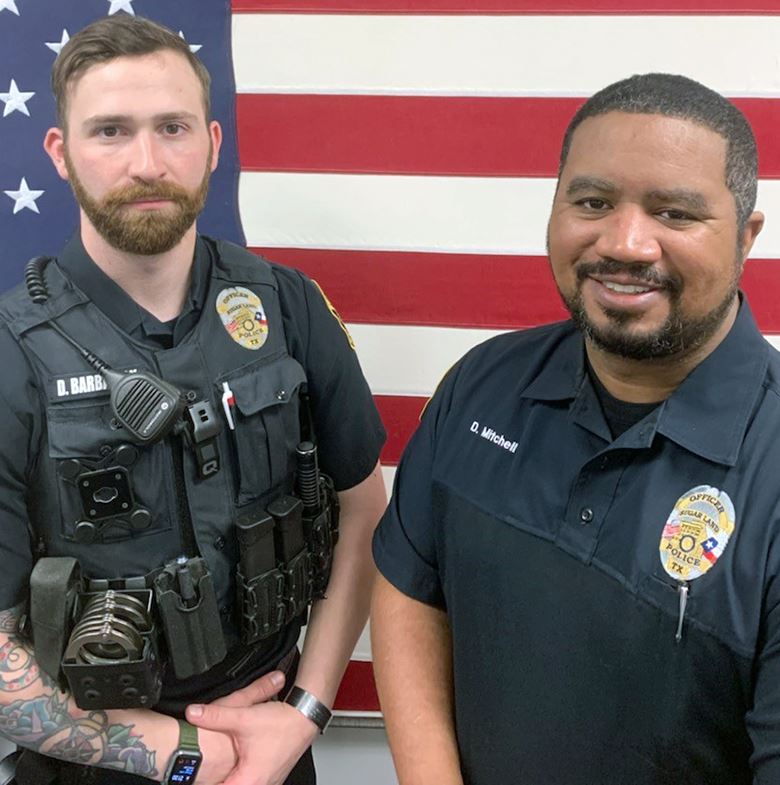