The City of Sugar Land is evaluating the zoning placed on its single-family neighborhoods to ensure consistency with the existing development. Several neighborhoods are platted (subdivided) and developed as zero-lot line residential, commonly known as patio homes and are zoned as Standard Single-Family Residential (R-1). The City of Sugar Land has a dedicated zoning district, Zero Lot Line Single-Family (R-1Z), for zero-lot line homes and is therefore taking action to rezone these areas to R1-Z and accurately represent the built environment. The zero-lot line neighborhoods proposed for rezoning consist of:

Rezoning the above neighborhoods will allow property owners to build on the zero-lot line, consistent with their house layout. Please note that other regulations apply and invite you to review the R-1Z zoning district regulations found in the Development Code here.

Chimneystone Section 1, Section 2, and Section 3, consist of 41.781 acres, 58.794 acres, and 45.798 acres, respectively. The total acreage for Chimneystone Sections 1-3 is 146.373 acres and consists of 564 single-family lots, Settlers Way Elementary, and Settlers Way Park. This area was platted between 1980 and 1982 and developed during that same timeframe. Chimneystone was annexed into the City of Sugar Land in 1995 as part of First Colony Municipal Utility District (MUD) #1 via annexation Ordinance No. 975 and assigned interim R-1 zoning like the majority of the residential MUD areas. When the City adopted the Development Code and new zoning map in 1997, Chimneystone Sections 1-3 were zoned R-1.

The Enclave at Grants Lake

The Enclave at Grants Lake, legally platted as Grants Lake Patio Homes, consists of 6.4248 acres and 41 single-family lots. The area was annexed as undeveloped property in 1991 as part of Fort Bend County Municipal Utility District #12 via annexation Ordinance No. 781. Upon annexation, this area was designated as interim R-1 zoning and then permanently zoned in 1992 as R-3 Townhouse Residential via Ordinance No. 790. The area was platted in 1993 and 95% of lots developed between 1993 and 1994 with the last lot developed in 1999. When the City adopted the Development Code and new zoning map in 1997, the Enclave at Grants Lake was rezoned to R-1.

Misty Lake, legally platted as Sugar Mill Section 7, consists of 31.102 acres and 154 lots. The subdivision was annexed as undeveloped property in 1979 via annexation Ordinance No. 274 and assigned R-1 permanent zoning via Ordinance No. 285 in the same year following annexation. The area was platted in 1983 and development was stagnant until it picked up in the early 1990s. Although the 1982 zoning ordinance included a zero-lot line overlay, historical zoning maps show this area was zoned R-1 without the overlay.  When the 1997 Development Code and zoning map were adopted, which replaced the 1982 zoning ordinance, the R-1Z district was created; however, Misty Lake remained zoned R-1.

Please refer to the frequently asked questions for additional information regarding the zoning change.

Submit a comment via our public hearing inquiry form. 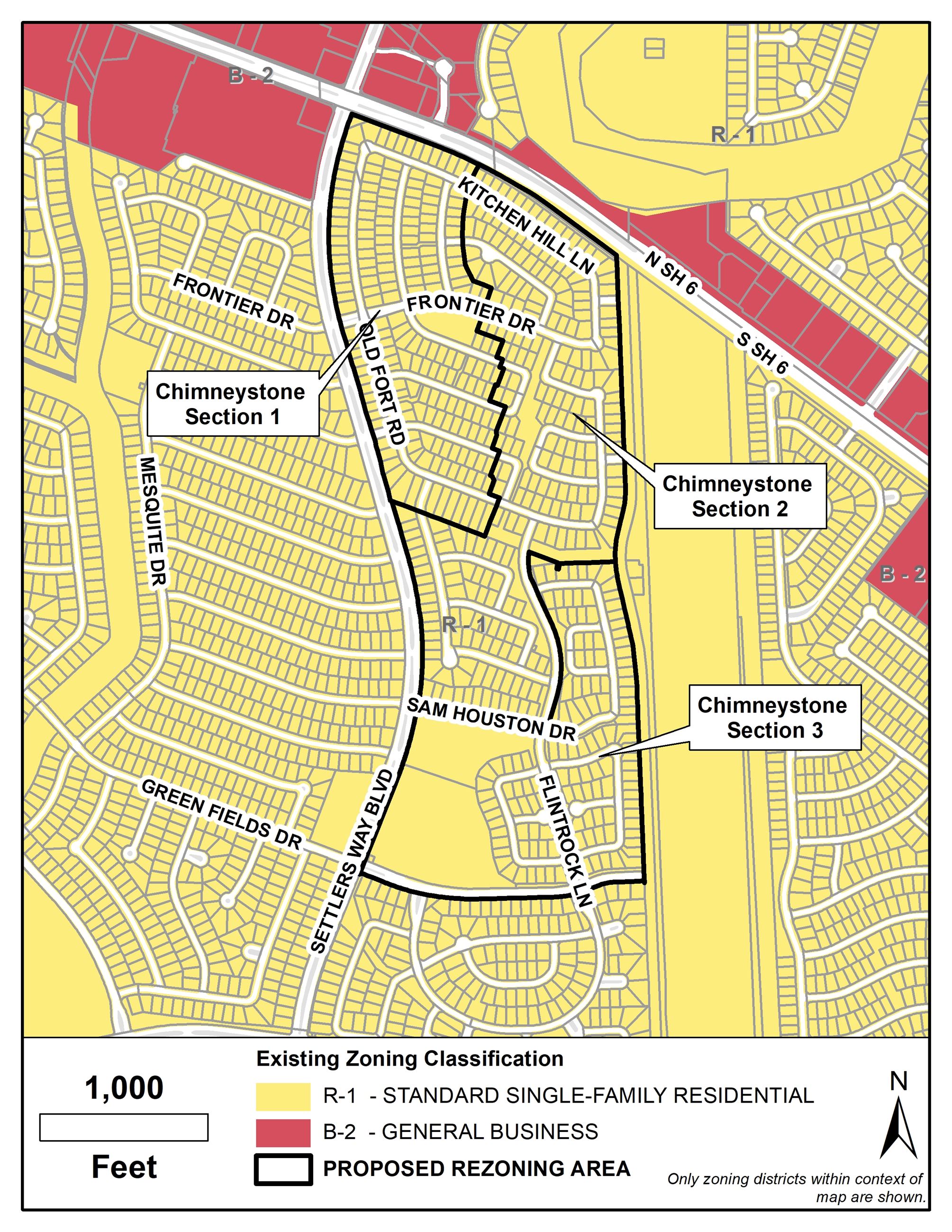